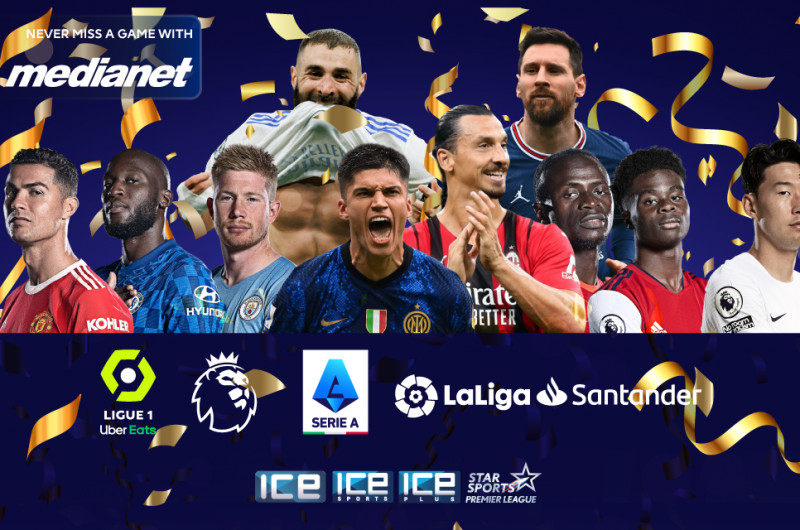 Medianet is excited to bring you the end of the season for the major football leagues this weekend! Only with Medianet can you watch the conclusions to Ligue 1, Serie A, La Liga, and the English Premier League! Here are a few matches we wish to highlight before the weekend begins:

Fiorentina will look to make amends for a heavy 4-1 loss to Sampdoria when they face Juventus on the last day of the season. The Viola are eager to book their place in European competitions, but they will have a big fish to fry in the decider. Midfielder Sofyan Amrabat is back from suspension, while Youssef Maleh is banned for the match. Both Castrovilli and Sottil continue to miss out with injuries.

The Bianconeri, on the other hand, dropped two points in a 2-2 draw with Lazio, but despite the draw, they will represent Italy in the Champions League next term. Since Fiorentina want this win more than Juventus, we predict that Dusan Vlahovic and Co. will return to Turin empty-handed. All Danilo, Kaio Jorge, Arthur, Chiesa, and Mckennie are sidelined with injuries, while Zakaria is a major doubt, and he will be assessed ahead of the match.

PSG will look to put icing on the cake on a very successful Ligue 1 campaign when they host Metz to their Parc des Princes on Matchday 38. Les Parisiens rolled over Montpellier 4-0, and it is no wonder the bookies see them as hot favourites to beat Metz in the “City of Lights”. Neymar is back from suspension, and with both Messi and Mbappe being in a fine form, home win should definitely be considered.

Les Grenats, on the other hand, are fighting hard to avoid automatic relegation to Ligue 2. Since Metz are not regarded as good travelers, anything but a routine home win would be a major surprise. In the first half of the season les Parisiens defeated les Grenats 2-1. As for the visiting side, Nicolas De Preville misses out through suspension, while all Fabien Centonze, Ibrahim Amadou, and Habib Maiga are sidelined with injuries.

All eyes will be on Stade Bollaert-Delelis when Lens and Monaco face each other on the last day of the season. Lens aim to build on back-to-back wins over Reims and Troyes, and they are likely to stick to their attacking style of play. Both Gael Kakuta and Jean Louis Leca are likely to miss the game with injuries, but there are no suspended players in the home team.

Les Rouges et Blancs, on the other hand, came from two goals behind to beat Brest 4-2 in their last league match. Monaco look unstoppable at the moment, and seeing that they want to secure automatic qualification for the Champions League, both teams to score betting option should be considered. A man to watch in the away side will be Wissam Ben Yedder, who scored a hat-trick at the weekend, while Cesc Fabregas remains in the recovery room.

City will become the 2021/22 English Premier League Champions with a win or draw against Villa. Pep Guardiola's side have suffocated their opponents all season; so you'd be forgiven for thinking that victory and the title are a foregone conclusion. But you can't spell villain without villa: Aston Villa! Steven Gerrard would love nothing more than for his team to spoil the party in Manchester and crown his beloved Liverpool champions. And City's defence will be shaky due to injuries suffered by Ruben Dias, Kyle Walker, and John Stones. Starting CB Aymeric Laporte is also nowhere near peak fitness. All eyes will be on the Etihad as we'll either see De Bruyne and the Cityzens lift the title or Coutinho spoil the day and help his former side slide in for the win.

It's been a historic season for Liverpool with the Quadruple still in play: having won the League Cup and FA Cup, reached the Champions League Final, and the EPL still attainable with gameweek 38 about to kickoff. Liverpool have not even lost a game this year in 2022. All the pressure is on City who need a win against a feisty Villa side, but Liverpool face some problems of their own. Their two talismans, Mohamed Salah and Virgil Van Dijk, are both in races to be fit to face Wolves. With their Champions League still to play for, it's unlikely both will be risked against a Wolves team that have seen their form crater. Everyone expects Liverpool to buzz-saw through Wolves and the question might not be will Liverpool win, but instead by how much. No one has had an answer for Luis Diaz and Sadio Mane, and it's doubtful this Wolves team will figure out what has eluded so many teams, unless Jose Sa has the game of a lifetime.

When Nuno Espirito Santo was sacked as Spurs manager on November 1st, the team was languishing in 8th place in what seemed like a lost season. They are now going into Sunday in the driving seat for 4th place and a Champions League spot: a testament to the work of Antonio Conte and the never say die attitude of the players. Coming up against already Norwich, the expectation is for Spurs to blitz numerous goals past the Canaries and for Heung-Min Son to try win the Golden Boot. But would it really be a Spurs match if there wasn't the chance for them to lose top 4? Lose, and Arsenal could pip Spurs to a Champions League spot. More unexpected things have happened, so keep your eyes on Carrow Road.

At one point this season, Arsenal were in the top 4 with several games in hand. How they lost this advantage is a question for wiser men to ponder. Nevertheless, this campaign should be considered a success for Arteta's young Gunners, who have seen their form only begin suffer once Thomas Partey suffered injury. On the flipside, their opponents Everton are battling to avoid relegation. Will Arsenal end the season on a high and potentially sink Everton, or will Everton live to fight in another Premier League season? Find out this Sunday!

This season has been truly disastrous for Manchester United. They came into it expecting to challenge for the title. Halfway through, Ole Gunnar Solskjaer was sacked and Ralf Rangnick came in. Rangnick ends his tenure with the worst winning percentage of a recent United manager, yet still appreciated by United fans for airing the club's dirty laundry and potentially seeing a reformation of its internal structure. Now, United need to win or draw against Crystal Palace to avoid potentially falling into the UEFA Conference League. Their talisman all season has been Cristiano Ronaldo, and they'll be relying on him again to win them the title. Meanwhile, Palace have enjoyed their best season in years. Palace never found themselves in a relegation battle and even reached the semi-finals of the FA Cup. Viera will undoubtedly be pleased by this season and nothing would bring a larger smile to his face than by seeing his team assert their dominance over United.

Watford are already relegated and Chelsea have 3rd place secured. Neither have anything to play for, but Fantasy Premier League players will want to tune in to see how many goals Chelsea can ship past Watford. Mason Mount, Reece James, Marcos Alonso, and even Christian Pulisic and Romelu Lukaku could swing fantasy seasons with a few goals and assists against Watford. Keep an eye on this fixture if your mini-league is on the line!

The Italian Serie A Title Scudetto is on the line in this one! Inter Milan need to win this game to stand a chance to win, with cross town rivals AC Milan currently leading them by 2 points. The Nerazzurri go into Sunday’s game on the back of a four-match winning run, including their Coppa Italia victory over Juventus. For Sampdoria, recent results have also looked positive, with wins over Genoa and a surprise thrashing of Fiorentina ensuring that Marco Giampaolo’s side remain safe from relegation. Even if they don't win the Scudetto, expect Inter to win.

Milan travel to face Sassuolo in the final game of the season, needing a win to guarantee the Serie A title. Stefano Pioli’s side have lost to the Neroverdi in each of their last two encounters and will need to be at their absolute best on Sunday. The hosts ended a spell of four games without a win last week in a well-earned 3-1 victory over Bologna. Sassuolo will be very aware of the part they have to play in the Scudetto race and are more than capable of showing up for the big occasion. That said, Milan’s form in Serie A this season has seen them withstand most tests they have faced and Sunday is unlikely to be any different. Last week’s 2-0 win over an in-form Atalanta side was perfect evidence of the Rossoneri’s ability to graft out a win as they withstand pressure for long spells of time.

Barca come into the game with nothing to play for. Real Madrid secured the title with a 12 point gap over Barca and are themselves playing for the Champions League title; meanwhile Barca have secured 2nd place and the all-important Champions League football that comes with it. It's been a rollercoaster season for the Blaugrana: with the departure of Lionel Messi, the sacking of Ronald Koeman, and what seems like the beginning of a new era under club legend Xavi Hernandez. Villareal had a magical season in Europe, reaching the Champions League semi-finals, but domestically it's been disappointing, and they find themselves potentially finishing the season in 8th and out of Europe entirely. Expect Barca to try and put on a show for their fans by shipping goals past Villareal.

Real Sociedad and Atletico Madrid face each other in San Sebastian in what is expected to be one of the most exciting games of Sunday’s program. La Real did well to beat Villarreal 2-1 at the weekend, with the team clinching their spot in the Europa League. The Basques have little to play for against Atletico Madrid, but their pride will be at stake.

All Mikel Oyarzabal, Carlos Fernandez, and Ander Barrenetxea are sidelined with injuries, but there are no suspended players in the home team. Los Rojiblancos, on the other hand, clinched their spot in the Champions League thanks to a 1-1 draw with Sevilla. Since both Real Sociedad and Atletico Madrid should be happy with one point from Sunday’s clash, we are tempted to put our money on draw. All Renan Lodi, Sime Vrsaljko, and Thomas Lemar are likely to miss the game with injuries.

Estadio Ramon Sanchez Pizjuan will host Sunday’s La Liga game between Sevilla and Athletic Club. Thanks to a 1-1 draw with Atletico Madrid, Sevilla secured their spot in the Champions League, meaning that they have little to play for in the last match of the season. There are no fresh injury worries in the home team, while Eric Lamela is pushing for a start as he served his ban in the last league match.

The Lions, on the other hand, are eyeing a spot in the Conference League. Athletic Club want this win more than Sevilla, and we predict that the visitors are going to prove their worth on the field. Both Raul Garcia and Nico Williams are sidelined with injuries, but there are no suspended players in the away team ahead of the trip to Andalusia.