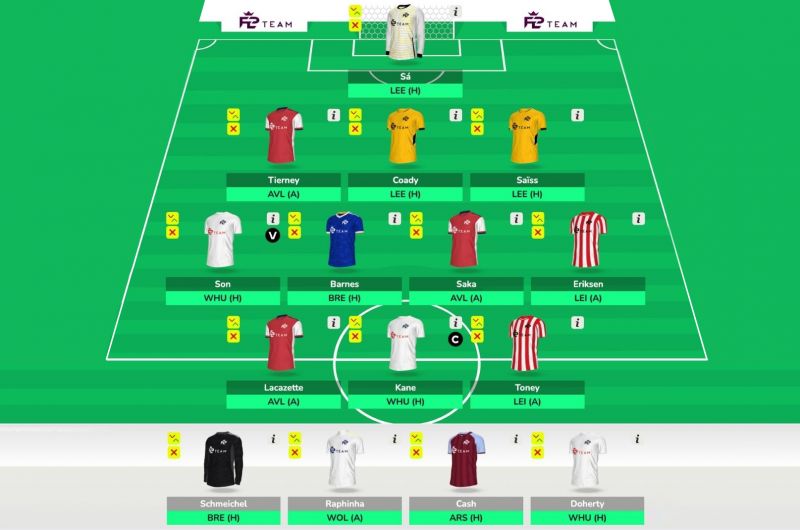 GW30 has come to be known as Blank GameWeek 30 (BGW30) due to the great number of teams 'blanking' this GW owing to the FA Cup Quarter-Finals. The fixtures that have been postponed will likely be played in GW33 or GW36 depending on how far Liverpool, Chelsea, and Manchester City advance in the FA Cup.

Because GW30 only has 4 fixtures its ripe for a free hit. I have outlined players to consider if you are free hitting:

Prices should be accurate to within £0.1m. I have been tracking price increases for most of these players and have pre-emptively priced in their expected increases.

If you have 7+ of the above players, especially Kane/Son and Saka, then you can consider getting by this week without free hitting. The reasons being that none of the fixtures are great and clean sheets are not expected; you may not want to bring in players like Jimenez or Toney.

If you have only one free hit remaining, I really do not recommend free hitting as this is not expected to be a high scoring GW. If you do not have Kane or Son, it is worth taking -4 to bring them in as they are both premium FPL assets, especially Kane on current form.

You can also mix and match how you want to structure your free hit e.g. 3 Spurs attackers, 2 Brentford attackers, 2 Wolves defenders, etc. Below is a FH30 squad I put together:

Kane is on fire and is the best option for a Captain. Son has not been firing in the goals and assists like Kane, but against Brighton if Kuluseveski's shot deflected in off a Brighton defender then Son would have been credited with the assist; as always it’s the margins. Lacazette has been involved in goals recently, though he could be swapped with Jimenez who has the easier fixture. Toney has also been banging in the goals and Leicester's weak defence is ripe for being carved up by him and Eriksen. On the flipside, Barnes could take advantage of Brentford's defence weaknesses. Saka is class and has to get in at his price point and current form. The defence is heavy on Wolves, but they are also the most likely team to get a clean sheet. Raphinha features on the bench: his expected goal involvement has been high but the Molineux

Is a tough place to rack up points. Cash has a tough fixture against Arsenal and I don't think Doherty is going to be able to get a cleansheet.

This is my squad coming into GW30. As of Thursday I earned 96 points this week (-8 due to transfers) with Schar and Wood yet to play. I've got 7 players featuring in BGW30 and Kane as my Captain. For the moment Kulusevski is my VC as he's on an incredible run, but Saka or Coutinho are also nice options. I plan to roll the free transfer to next week because I do not anticipate a lot of points being gained this week by free hitting and I do not want to bring in any of the strikers or defenders featuring this week. I have considered bringing in Raphinha/Barnes for Coutinho, but Raphinha has a tough fixture away at Wolves and Barnes does not have ideal opponents beyond this week. I prefer the added flexibility of 2 free transfers next week to bringing either in this week.