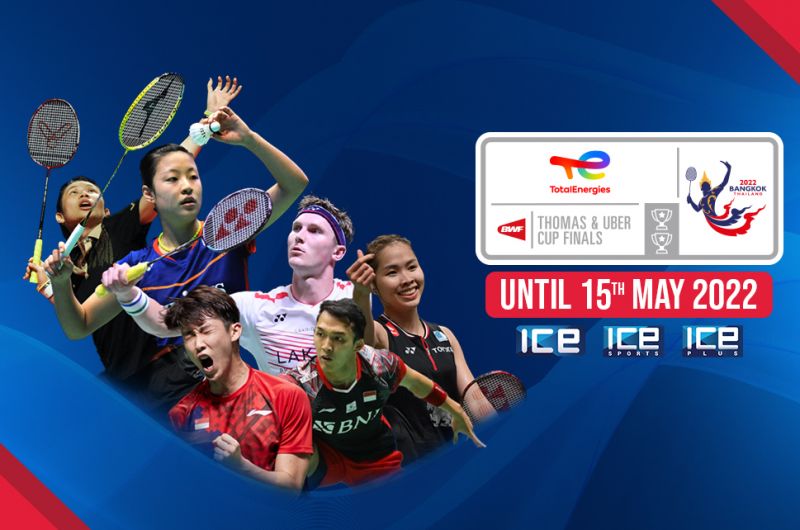 The Thomas Cup and Uber Cup are two of the Badminton World Federation's grade 1, major events. The two cups are contested every two years by 16 teams, with the Thomas Cup featuring mens teams and the Uber Cup showcasing womens teams.

Defending champions Indonesia claimed their first Thomas Cup title in 19 years in Aarhus in October 2021 (the 2020 version of the tournament was delayed till Oct 2021 due to COVID-19), and will be relying on Jonatan Christie to carry the team.

Christie, ranked eighth in the world, has reached three consecutive finals – winning the Swiss Open before falling at the final hurdle at the Korea Open and Badminton Asia Championships – and is the form player of the moment.

Group B features the last two teams to win the trophy before Indonesia, China (2018) and Denmark (2016). China's Shi Yu Qi is not in the team, leaving Lu Guang Zu and Li Shi Feng as the top singles players hoping to boost the Chinese team seeking a return to the top with what would be their 11th title after they lost out in the final in Aarhus.

There's also a blockbuster Group D, with Japan and Malaysia all in the mix.

The Japanese strength no doubt lies in their doubles pairings, as they have the fourth-, fifth-, and sixth-ranked men's doubles teams including world champions Hoki Takuro / Kobayashi Yugo.

With only two pairs allowed to be selected, it'll be a tough pill for the pair that does miss out.

Whoever is selected will have to back up Momota Kento, the world singles number two who has been in a wretched run of form.

Malaysia will be led by Lee Zii Jia, the Asian champion who beat Christie in Manila last week. That victory will surely have the independent player – he is not officially part of his badminton federation's set-up – on a high, and coupled with Asian silver medallists Aaron Chia / Soh Wooi Yik in doubles, there should be no surprises in store.

On the women's side, Group B appears to be the toughest group of the four in the Uber Cup, with defending champions China at the top of the heap.

The unheralded Wang Zhi Yi, fresh off the back of a major upset win at the Badminton Asia Championships where she beat Japan's Yamaguchi Akane in the final, is riding a high into the Uber Cup where she will be able to count Olympic champion Chen Yufei among her teammates.

Also in this group are Chinese Taipei and Spain. That means a likely face-off between Tai Tzu-ying, the world number two, and the freshly-crowned European champion Carolina Marin – now back and healthy after yet more injury nightmares.

Australia are the final team in the group.

Top seeds Japan are the headline team in Group A, with the world's top-ranked player Yamaguchi. While there are doubts over the fitness of Okuhara Nozomi, there appears little to cause Japan – winners of the Uber Cup in 2018 in Bangkok – any worries in the group.

Indonesia are also in this group, but are missing many of their top women's players and will be nervously looking over their shoulders at France and Qi Xuefei, and Germany with Yvonne Li.

The hosts Thailand find themselves in Group C, where they will be heavy favourites in a group that includes Denmark, Malaysia, and Egypt.

An Seyoung will lead Korea in Group D alongside the doubles teams of Lee Sohee / Shin Seungchan and Kim Soyeong / Kong Heeyong, with India also likely to make it through with their world number seven P.V. Sindhu.

That group is completed by Canada and USA.